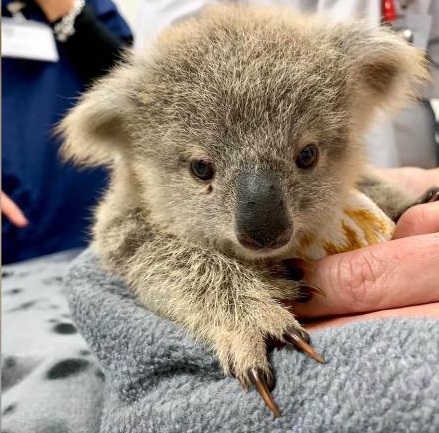 ISCAT is joining schools worldwide in Knitting for Australia…  The bushfires which have ravished Australia in recent weeks have united thousands of volunteers across the planet in helping the most iconic of Australia’s affected animals.  While over 1 billion animals are estimated to have died in the fires, many more have been orphaned or left homeless by the crisis.

Not only kangaroos, but also other marsupials such as flying foxes need pouches in which to grow.  Without their mothers, the orphans are relying on hand-created pouches from donors.  Rescuers say koalas need mittens for their burnt paws.
Following the appeal by Australia’s Animal Rescue Craft Guild, animal lovers across the world rushed to sew, knit and crochet pouches, inundating the guild.
Like many schools in Britain, the US and Canada, ISCAT has joined the appeal and Biology teacher Teresa Krijger will launch a Knitting Club this term.  A keen and competent knitter herself, Teresa has volunteered to teach and/or lead all who are interested in learning to knit during patio time over the coming weeks.
Knitting is a skill which has fallen by the wayside in recent times.  ISCAT’s more mature members of staff well remember learning to knit at school themselves!  It can be a wonderfully social activity, and we envisage all our ISCAT knitters engaging in story telling and sharing experiences as they knit…
Urgent calls from the Australian animal welfare are now being received for funds in which to support the medical needs of the animals, so ISCAT knitters plan to work on ‘team-knitting’ patchwork quilts which we can later sell to raise funds.  This is an ideal project for beginning knitters who will proudly be able to add their completed squares to the final project.
ISCAT Knitters is open to boys and girls, old and young and we look forward to seeing you there!